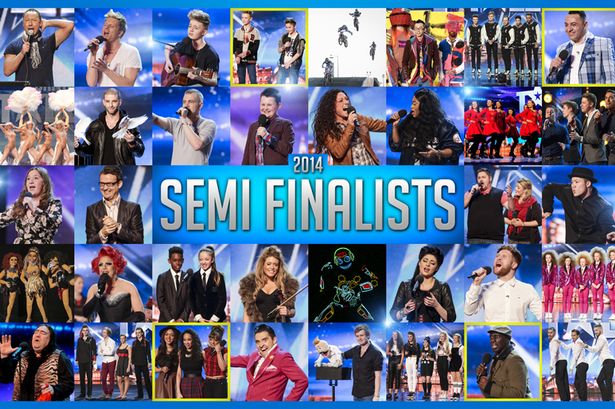 BGT: Make sure you join us for our coverage of every live semi-final next week
The semi-finalists for Britain's Got Talent 2014 have been revealed.
Five acts were already guaranteed a place in the semi-final after receiving the Golden Buzzer treatment. on ]the ITV talent show but who else has made the cut?
Simon's pick, teenage singer and rap duo Bars and Melody, David Walliams' pick singer Christian Spridon, Alesha's pick girl band REAformed and Ant & Dec's pick, comedian Toju.
Amanda's pick Paddy Jones and Nico are also guaranteed a place in the semi-finals but dancing granny Paddy's recent injury has cast that into doubt.
Acts joining them include DJ Allan Turner-Ward, singer Andrew Derbyshire and Polish variety act Kony Puppets.
Following in the footsteps of Eurovision 2014 winner Conchita Wurst, drag act La Voix and the London Gay Big Band have also made it through to the semi-finals alongside dancer Kieran Lai, impressionist Jon Clegg and Welsh singer Jodi Bird.
Death-defying motocross display team, BoldDog[/url] have also made it through to the semi-finals, as has 14-year-old singer Baily McConnel
See all the Britain's Got Talent semi-finals in our gallery below.
* Britain's Got Talent semi-finals begin Monday May 26 at 7.30pm on ITV